The legendary Charley Pride is on his way to Washington to perform at the 2013 Black Tie & Boots Inaugural Ball taking place this Saturday, January 19th! Sponsored by the Texas State Society of Washington, DC, this is one of the largest events taking place during the inaugural festivities with over 15,000 guests expected. “I am pleased and honoured to be a part of this event that celebrates President Obama and the start of his second term in office”, noted Charley, “it’s truly wonderful to be asked to perform. The Texas State Society knows how to throw a great party, so I’m looking forward to a very memorable evening.”

This is Pride’s second Inauguration related event. He performed in Washington in January of 1981 at the Capital Centre gala celebrating President Ronald Reagan. In May, the Country Music Hall of Famer will travel north of the 49th to tour select cities in Canada. 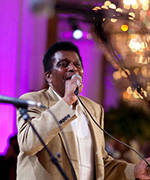