CHARLEY PRIDE – RETURNS TO CANADA IN MAY 2014

The country music icon credited with creating “one of the most comfortable yet exciting sounds in country music” is back in Canada in 2014, and fans are elated.

CHARLEY PRIDE who has been performing in Canada on a regular basis for over 45 years will return in late May of 2014 with appearances scheduled in six provinces including New Brunswick, Nova Scotia, Ontario, Saskatchewan, Alberta and British Columbia.

CHARLEY PRIDE has always had warm feelings about his trips to Canada, often stating that country music fans in this country are some of the greatest, most loyal fans in the world.

Pride is a singer who knows what it takes to please an audience and is often greeted with a standing ovation. There is nothing outdated about his music or the sound he creates with his renowned band “The Pridesmen” as they feature many of his 36 “Number One Hits” in every show. He always leaves his fans satisfied. 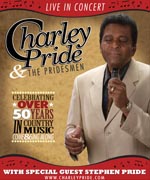